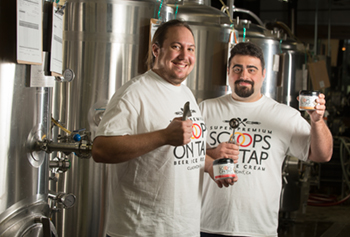 Sam Howland and Bryan Marasco have been friends since first grade. At Cal Poly Pomona, Howland chose to study hospitality management while Marasco opted for marketing.

The two shared an interest in making their own ice cream, and when Howland secured an internship and then a full-time job as a brewer at Dale Bros. Brewery in Upland, their hobbies began to mix.

“One day Sam poured some beer into his ice cream blend as an experiment.” Marasco says. “It ended up being very delicious. And the concept just continued to expand from there, trying different flavor and beer combinations.”

Marasco moved from taste tester to business partner when the two decided to make a go of taking their beer ice cream to the public. Their idea grew with the help of Poly Founders, a student entrepreneurial club, that hosts the annual Bronco Startup Challenge, a competition in which students develop a business concept and vie to win seed money. They dubbed their concept Scoops on Tap.

“We always wanted to start a business, so we thought, ‘Why not do it with this ice cream?’” Howland says. “We had already been thinking of Scoops on Tap for a while, and we had been developing the idea, but we hadn’t put much on paper. The competition required us to create a business plan. 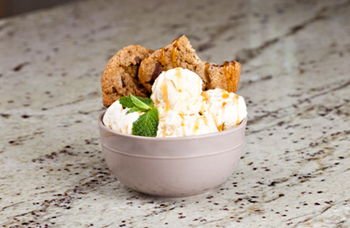 “We would not be where we are now without creating those documents and without taking the time to think about it,” he says.

Early this summer, Howland and Marasco began selling their ice cream at small events that Dale Bros. holds throughout the year.

“It became this thing where people were demanding the ice cream,” Howland says. “That motivated us.”

Things are looking good so far. They have made appearances at several festivals in the area, and are in talks with restaurants and retailers to sell Scoops on Tap.

“Right now, we have 11 different ice creams that we’re producing,” Howland says. “We started out with just two that were under the Dale Bros. label. Now we’re making ice cream with four breweries.”